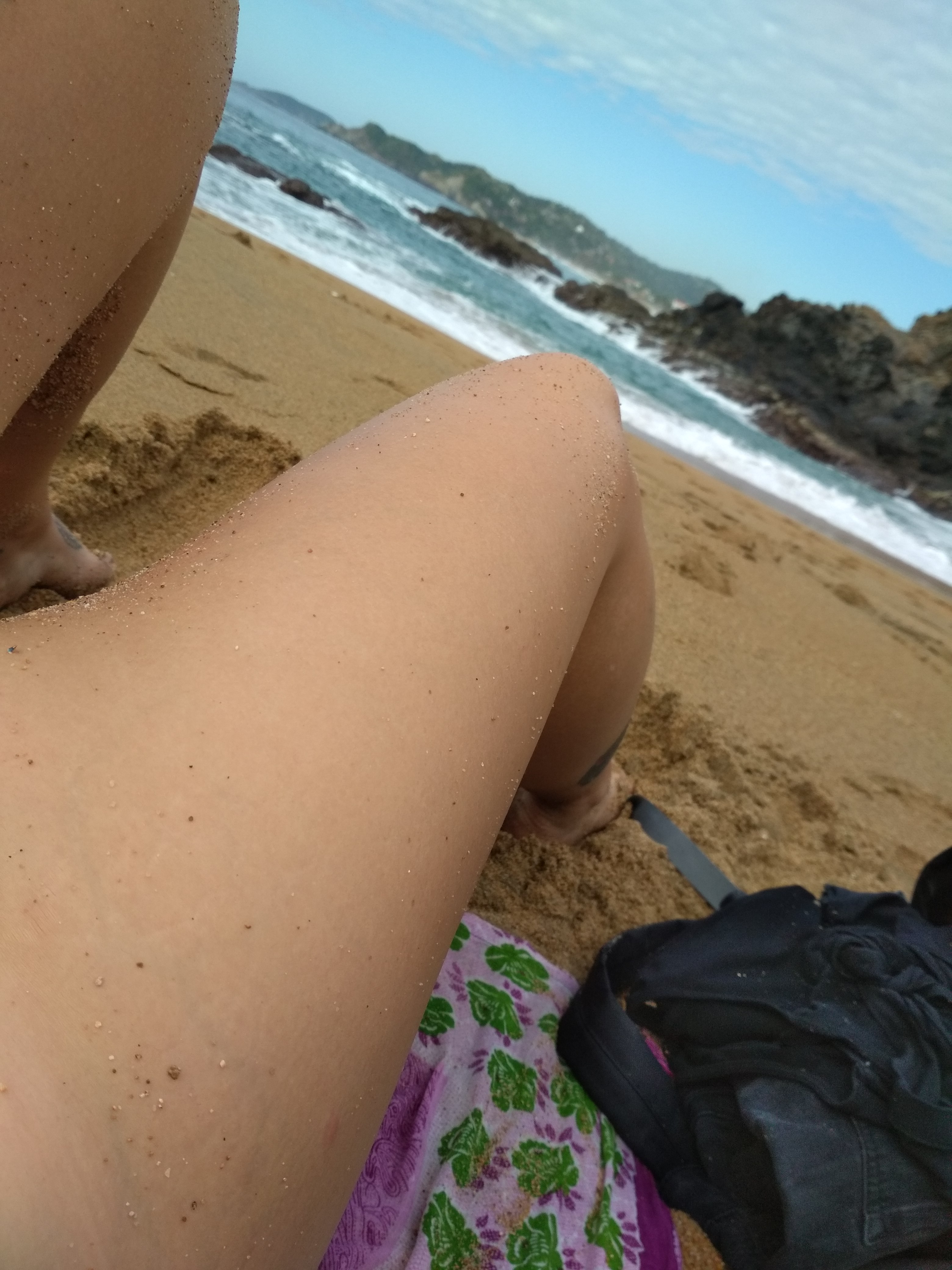 Today, I’m going to tell you about my trip to Mexico’s only nudist beach. I’ve also included some useful information on how to get there etc. So, if you don’t care about my story and just want that juicy info you can scroll down and get stuck into the useful stuff. I promise I won’t be offended.

Sometimes, I like to be naked. Not all the time, but every now and again I get a craving. At a particularly raucous hen do (that’s a bachelorette party if you’re not from England) a couple of years ago, I spent a significant portion of the weekend strolling around the country house we’d hired in nothing but a chef’s apron. I even wore it in the hot tub (bikinis are boring). The bride’s mum was understandably horrified, but I felt magnificent so it was worth it.

I’ve never been fully nude in a public setting though, so when I first decided to go to Zipolite, the home of what’s said to be the only legal nudist beach in Mexico, I was shitting myself a little bit. Being starkers around so many people was unchartered territory, and the thought of it made me nervous AF. My panic about being panty-less worsened when, a few days prior to my naked adventure, I met three men in a Oaxaca City hostel who said they’d be heading to Zipolite at the same time as me. They suggested we all go together, and at that point, my brain really went into overdrive. See, anonymous nudity probably would have been fine. Nudity around the female mates I’ve known since I was a child is definitely fine. But, nudity around three new male friends did not feel fine; especially since one of them was a super-fit French man, and the thought of him seeing my doughy ass in the bright Mexican sunshine made me feel a bit sick.

But despite my fears, off we went, and off came our clothes as soon as we got to the beach. Luckily, we’d arrived at sunset and the light was low enough that I didn’t feel too exposed. But, as we drank beers and watched the sun go down, I found myself constantly worrying about my body and wishing that it was more beach babe than beached whale. As you might have read in this post, I’m usually pretty chill about my body when I travel, but public nakedness presented a whole new challenge. But, I’m no quitter (especially when it comes to taking my clothes off), so I decided to make true body confidence my mission for the following day.

Early the next morning we headed to Playa del Amor, a secluded bay that’s said to be the most naked and most gay section of the beach (true on both counts).

We stripped off and I quickly flattened my body against my towel as I was still feeling super shy about being unclothed in front of my pals. But, as the day went on, I set myself little challenges to try and overcome those insecurities. I made myself walk to the sea confidently, rather than shuffling along the sand stressing out about my butt wobbling, and when I drank a beer I forced myself to sit up proudly instead of hunching over and trying to cover my less-than-perfect tits and tummy.

My little challenges actually worked. By the end of the day I was sitting/lying however I felt comfortable, rather than however I thought my body looked best. I played in the sea with my mates without being embarrassed about getting wiped out by waves (ever seen a naked person get tumbled by a too-strong wave? It’s not nice for anyone involved). And eventually, I was happily wandering to the bar for more cervezas, feeling totally confident despite the fact that it was manned by fully clothed hombres.

You see, in the end, it became easy to be naked because nobody cared that I was naked. I didn’t see anyone looking at my dough-butt or pointing at my cellulite as I passed them. And if nobody else cared, then why did I care so much?

It also struck me how nudity is perhaps the final taboo. Even as I write this I’m low-key worrying about how many of you will label me a slut for being naked in public. And, there’s definitely some awkwardness left in me about exposing my body in a non-sexual setting. While in Zipolite I was sharing a private room with a bloody brilliant American guy because that was our cheapest option for accommodation. And, even after a full day spent lying on a nudist beach with him, I still went to the bathroom to change when we got home. Being naked in front of him didn’t feel appropriate in that context, but why not? It’s something I’ve been wondering about ever since that trip.

I left Zipolite to go to Puerto Escondido a day later, and when I got there it actually felt weird to be wearing a swimsuit again (so much so that I snuck my top off when the cops weren’t looking). Oh, and I got a date with the super-fit French man. Picking up a dude on a nudist beach made a nice change from my usual Tinder adventures in Mexico.

You can be naked on any part of the beach in Zipolite, but there are a lot more clothed people on the main section so it just depends on how comfortable you are with getting your tits/dick out in that scenario. I kept my bottoms on when we went for a post-breakfast dip on the main beach, but there were plenty of people wandering around fully nude. The sea is pretty rough along the entire coastline so it’s not a safe place for swimming, but you can float around and do some paddling. It’s also awesome for surfing if that’s your thing (nudity optional).

To get to Playa del Amor, AKA my favourite beach of all time, walk all the way to the end of the main beach (to the left if you’re looking out to the ocean). You’ll come to some rocks with a concrete staircase leading over the top of them. The hidden bay is gorgeous and is pretty much empty before noon if you prefer to have some privacy while getting naked. Later on, the beach gets busier (mainly with beautiful gay couples), and has a relaxed, friendly, and non-judgmental vibe. There’s also a small bar selling coconuts, beer, and mescal.

How to get to Puerto Escondido from Zipolite

To get to Puerto Escondido the cheapest and fastest way is to take a colectivo/truck and then a larger bus. I thought it was going to be a difficult journey with my limited Spanish, but it was super easy, relatively comfortable, and very cheap.

First, head over to the main road that runs through Zipolite (the 175, seen on the map below):

Then, walk west for around five minutes until you see this little building:

You should see trucks like these waiting on the road:

If there aren’t any there’ll be one along in a matter of minutes so hang tight. The trucks are $10 for the ride and you need to pay the driver first before hopping in the back. The journey to where you need to catch the next bus only takes about 20 minutes, and you need to press the bell when you want to get off. The stop is on the map below and is at an Oxxo if you need a landmark. If you’re not sure where to get off, tell anyone in your truck that you’re going to Puerto Escondido (voy a Puerto Escondido) and they’ll tell you when you get off.

Once you’re down from the truck, cross the road and wait for the Puerto Escondido bus. It may already be waiting (it was when I arrived) and is white and blue. It will have a sign for Puerto Escondido in the front window and the ride is $42 (sit down first and the conductor will come to collect your dinero). This part of the journey takes around 1.5 hours and is safe and comfortable.

How to get from Zipolite to Oaxaca City

To get to Oaxaca City from Zipolite, Eclipse runs shuttle buses throughout the day (check the timetable on display at their stand on the 175 road to get up-to-date schedules). The journey costs $310 and takes seven hours. Take snacks and water, and if you get motion sickness pop some pills beforehand as the journey is pretty windy going over the mountains (it’s also bloody beautiful).

How to get from Oaxaca City to Zipolite

We stayed in the Casa Angel Youth Hostel (it was one of the best hostels I’ve ever stayed in) and they booked a bus with Eclipse for us. Alternatively, head to their office at Armenta y López 504 and book it yourself.

As above, it takes around 7 hours and is windy AF.

Where to stay in Zipolite

Booking accommodation online isn’t really an option unless you want a hotel in Zipolite, in which case, Booking.com has loads of great places. But, there are loads of options available so your best bet is just to walk around when you arrive and ask places if they have rooms (most people speak English if your Spanish is shit). Zipolite hostels are few and far between and there’s only one place with dorms which is called El Carrizo. It’s super basic, yet often full due to the lack of competition. Dorms are $70 per bed and private rooms go for $150. The hostel was full when we went, so instead my mate and I paid $300 for a huge room with two beds, a fan, a bathroom with warm(ish) water, and a kitchen. Another mate paid $200 for the same but with one bed, and both places were clean, secure and right on the beach.

What to do in Zipolite

Nothing. You’re supposed to do nothing in Zipolite. Most people head there to relax and enjoy the brilliant weather, but if you can’t sit still you can take a surf lesson at one of the schools dotted along the beach.

There are tonnes of options for food and drink whatever your budget, just walk along the beach or the main street and let your nose (or your budget) decide what’s for dinner. If you haven’t tried tlayudas or tamales yet, find them and eat them immediately: you won’t regret it. Or, buy a litre of pulque for $80 from the little pop-up bar on the main strip and fill up on homemade booze instead. The bar is a converted camper van blasting music, you won’t miss it.

We didn’t see an ATM in Zipolite, so take plenty of cash with you. If anyone knows of an ATM in the town, drop me a note, por favor!

I Got Interviewed Live on Mexican TV

Why You Shouldn’t Have a Massage in Colombia

A Wild Tale about Buying Drugs in Mexico City