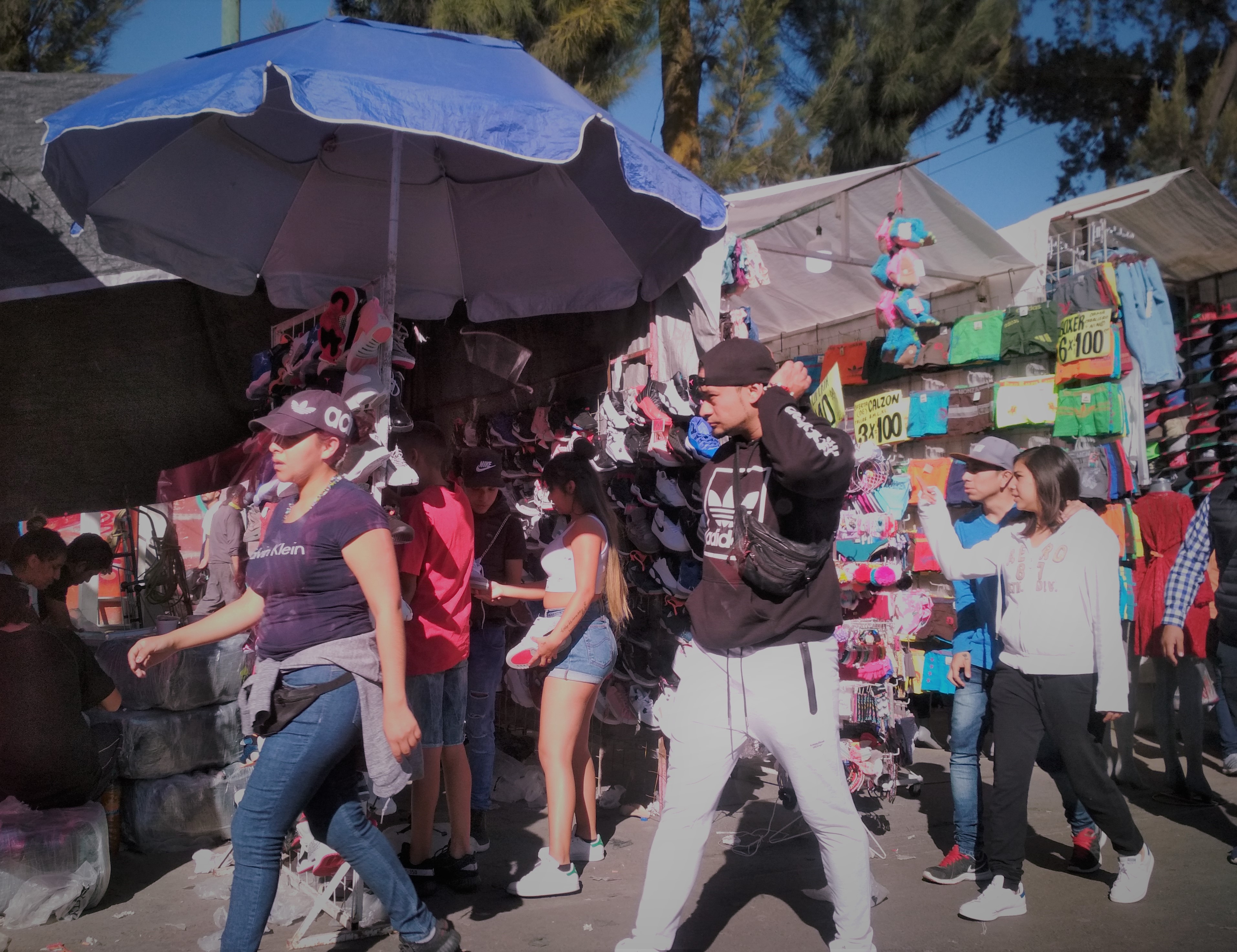 Recently I read this article on The Culture Trip which calls Tepito market in Mexico City the most dangerous in the world. It sounded scary AF, so obviously I needed to go have a wander around and test how hard I actually am.

Quick backstory on Tepito: it’s been known as a barrio bravo (fierce neighbourhood) since pre-Hispanic times when the Aztecs decided that Tepito residents weren’t allowed to trade in the main market. So, they set up their own and it quickly became a haunt for folks that were outcasts or that loved doing crime. Today, Tepito still has a reputation of being overrun by criminals, and that’s definitely a bit true. Thieves and drug dealers operate in and around the tarp-covered market and pick-pocketing and muggings aren’t exactly uncommon. Jolly, huh?

My Middle Name is Danger

After being told by several local friends that I shouldn’t go alone because I am blatantly a dumb foreigner, I asked my mega Mexican mate Yaisa to take me. Yaisa is the queen of shopping and a totally smart broad, so I felt like I was in safe hands with her.

This wasn’t actually my first trip to a scary market because, as previously stated, my middle name is Danger (not really, it’s Elizabeth). I went to another one called Mercado Sonora a few weeks ago and that was proper terrifying. I was with two Mexican friends and on the way to the market the Uber driver told them to tell me to not speak English in earshot of anyone in the market (lol, like I have another language at my disposal). That market was overwhelming in the worst way. It was hot, there were at least 1 million people running around, and any place where you can buy voodoo dolls and a live crocodile isn’t ok with me. Also, a creepy man with a huge scar on his face spent 20 minutes following me around trying to steal my bag. Nice.

Rules for not Getting Killed

But, back to Tepito. We chose a Saturday afternoon for our mission and before we went Yaisa had some instructions for me:

Shit. Maybe I’m not hard and this place actually is dangerous after all.

So, for Tepito I dressed as plainly as I could and only took as much money as I could afford to get stolen which was the equivalent of £12.

When we arrived I was shitting it a bit because I proper didn’t fancy ruining my track record of having never been robbed in Latin America. But I soon settled down and therefore instantly forgot the no-gawping and no-English rules, shouting “fucking hell everything is so cheap here” more than once. In my defense though, everything was so bloody cheap!

Let me Tell You About the Market, Please

Tepito sells everything you could possibly want or need. New phone (possibly stolen)? Yep. A vast array of cheap toiletries? Sure. Clothes so bargainous they make Primark look pricy? You got it, bae.

After the initial nerves of being in Tepito died down, I actually didn’t feel frightened at all. It felt like a totally normal market, albeit a little rough around the edges. But perhaps that’s just because Yaisa and I stuck to the safe areas of the market instead of running around ‘Tepito proper’ like a pair of idiots.

As for the other people that frequent Tepito market, I was surprised at the diversity of the crowd. There were no other foreigners around as far as I could see, although it’s entirely possible that they were there and I didn’t notice them because they weren’t gawping/shouting fuck every couple of minutes. Instead, the throngs of folk were made up of entirely regular people. From what I’d read about Tepito I expected everyone to be covered in prison tattoos and be wearing a look on their face that silently said “your purse is mine, gringa”. But no, other than one or two people that scared me a bit, the majority of the marketgoers were just normal Mexican folk lapping up some sweet bargains.

But don’t let the crowd of regular people fool you into doubting the fierceness of the neighbourhood and its infamous market: check out this sign which hangs in almost every aisle. For my pals that don’t speak Español, it means something along the lines of: “whoever is caught committing theft will be lynched and we’ll beat the crap out of them”. Damn.

I definitely recommend a trip to Tepito to see an entirely different side of Mexico City. It’s fascinating, fun, and entirely safe as long as you keep your wits about you and don’t act like a dickhead. Oh, and what did I risk life and limb to buy in the world’s most dangerous market, I hear you wondering? Toothpaste and a Santa hat, obviously.

How to Get There

The market is open every day but Tuesday and is about ten blocks from the main square of Zócalo. There’s a metro station right by the market but be warned, it’s sketchy AF so if you choose to use it be properly careful would you, please? The station is called Tepito (duh) and is on the B line. If you’re coming from Condesa/Roma it’ll take about 30 minutes.

Alternatively, pop yourself in an Uber or DiDi and get dropped off outside La Lagunilla market on Eje 1 Norte which is a relatively safe area. From there, you can cross the road and enter Tepito. Check out La Lagunilla while you’re there, too. This market is safe overall but it’s still best that you follow Yaisa’s rules to avoid getting robbed. My favorite bit was the massive indoor shoe market where you can buy beauties like these for about £3.

How not to Die

Pay attention: this bit’s important. You probably won’t die in Tepito as long as you’re not an idiot. Make sure you follow my mate’s instructions about leaving all your flashy shit at home. Also, Yaisa is right, you shouldn’t take photos (getting your phone out is a bit dumb and IMO can only be excused if you’re taking pictures to include in your brilliant travel blog). Also, try not to gawp like the massive tourist that you are. There are ‘safe’ areas of the market that you’ll be fine in: basically, the areas closest to the main road where the metro station is/where the Uber dropped you are golden but the deeper you go the more likely you are to leave without all your shit.

Another Mexican mate’s got a crazy story about buying drugs in Tepito which I’ll be writing about in a couple of weeks. Keep an eye out for that little fun-nugget, and in the meantime contact me if you have your own scary market tale to tell (I bloody love scary stories).

Wanna Know What Happens in a Women’s Circle?

My Third Month in South America